The recent Covid-19 pandemic has taken the whole world by surprise and the financial markets are beginning to feel the effects. After closing at a record high of $29,551.42 on February 12th, it opened March 30th at $21,678.22, dropping a staggering 26.6% in just over a little more than a month. At the same time, gold prices rose from $1566.10 to $1622.00, showing an increase of 3.4% where the overall market is on a downhill spiral. In fact, recently gold has overtaken the 5-year return and leads as a better investment compared to the overall stock market (as can be seen in the graph below). 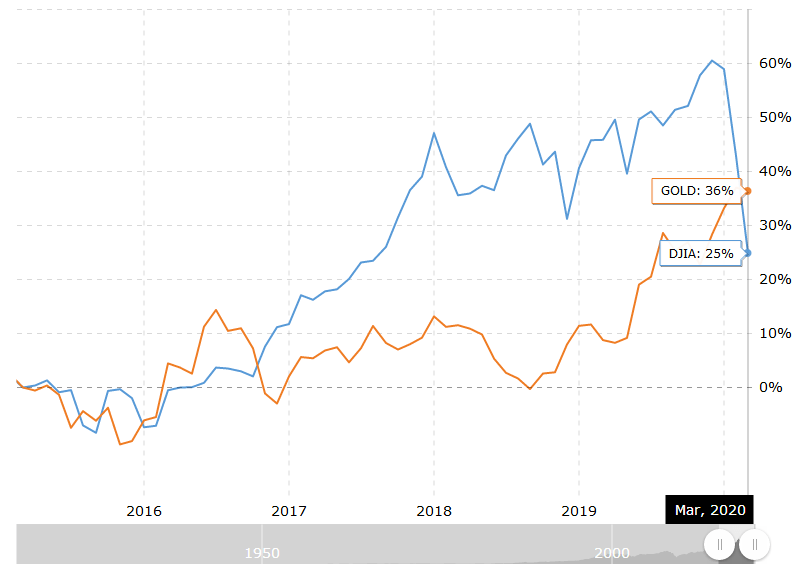 However, the effects of the pandemic have only begun to affect the market and many experts expect gold to drop to $1520.00 in the short term. Peter Schiff, a financial expert who has always been a strong supporter of gold has credited this to investor’s lack of awareness of monetary and fiscal policies changes to come in the middle of this pandemic crisis. According to Schiff, “Their mindset [financial investors] is similar to that of central bankers. They have no idea how bad the consequences of the current monetary & fiscal policy mistakes will be.”

Alongside other experts, Schiff believes that once investors realize the real implications of the numerous financial policy changes, gold will skyrocket; though many debate just how high gold will rise. And while many have concerns that the overall market will face harder conditions than during the 2008 crisis, this is seen as a strong positive for gold which has always thrived during harsh economic times. Overall, many expect gold prices to drop in the short term as the market adjusts to recent changes and then boom once investors realize the true value of a save haven in gold during our current economic turmoil.